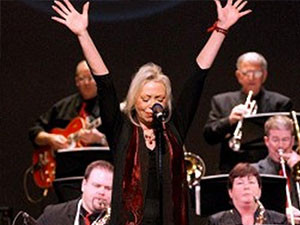 For over two decades Rio has reigned as the resident “Big Band DIVA” for the Wenatchee Swingin’ Big Band and more recently as the sultry, soulful chanteuse for The Wenatchee Jazz Trio and jazz duo Patrio. Rio’s vocal style is reminiscent of the Big Band era, echoing shades of Peggy Lee, June Christy and Julie London. She is a true vocal “stylist” who can belt out a swing tune and seconds later deliver a ballad in a whisper. Though considered a Big Band vocalist, she remains equally at ease working with small combos while continuing to delight audiences throughout NCW with style, class and sizzle!

Patrio pianist Pat Thompson, taught music for 37 years at Green River Community College in Auburn, WA. His jazz and commercial music programs were highly regarded, and his vision and creativity as an educator produced a large number of successful music careers at all levels. A skilled and experienced arranger/ orchestrator, Pat remains active with a variety of writing commissions and music projects.