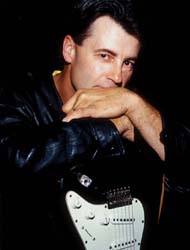 Pat Coast is a Northwest native and a serious student of blues guitar. Though proficient in many genres, including rock and roots rock, R&B, funk, country and acoustic finger style guitar, Pat’s first love remains the blues, which he began learning at age 14 with some old T-Bone Walker and B.B. King records. . King records. Since 1992 Pat’s bands have ranged from a seven piece powerhouse band with very tasty horn arrangements down to a lean and mean power trio. Having released five CDs receiving air play on stations from Seattle to Kentucky and national publication reviews, Pat’s taken his act on the road as a favorite request for presenters in dozens of festivals and concerts throughout Washington, Oregon, Idaho, and Montana.

“Coast’s guitar sound is quicksilver fast and a little jazzy, ala Robben Ford or Chris Cain, though he burns with a little more rock edge
than those guys…”
-Blues Revue Magazine

“Great horn arrangements and tasty vocals and guitar from Pat Coast. They jump and jive, touching all the bases from swing to funk and back to blues…”
-Blues Access, Rooster’s Picks